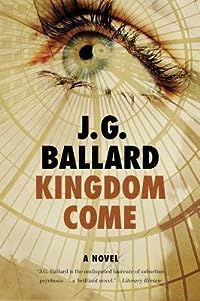 A violent novel filled with insidious twists, Kingdom Come follows the exploits of Richard Pearson, a rebellious, unemployed advertising executive, whose father is gunned down by a deranged mental patient in a vast shopping mall outside Heathrow Airport.

Investigating the mystery, Richard uncovers at the Metro-Centre mall a neo-fascist world whose charismatic spokesperson is whipping up the masses into a state of unsustainable frenzy.

Last night I stayed up late (well, for me) and finished Kingdom Come's last 100 pages. So, while reading the novel's last pages by the light of Nook screen, I decided that I like but don't love this book. Kingdom Come revolves around a Londoner's attempts to uncover the details of his father's death in an pparently random mass shooting at the Brooklands Metro-Centre, the imposing, cathedral-like retail mecca that forms the novel's geographical and metaphorical core.

Certainly the psychopaths in Kingdom Come are drawn together, which mitigates the seeming unlikelihood of so many people thinking similar things about the world in one place not so unlikely. Is Ballard suggesting that fascism is the end "ism" of humanity, or simply the inescapable "ism" that all roads lead to. He sees it as a psychopathic "ism," that much is clear, but is he saying it is necessarily a bad thing? In fact, Ballard seems to be suggesting that we are already deep into a fascism that we simply can't see for being in it. Then there is consumerism, an "ism" bound tight to Ballard's soft fascism. Ballard seems to be saying that violence is the only place where humans truly excel, and a necessary part of what makes us human. There is a lot of forgiveness for violence in Kingdom Come, an unreal forgiveness, but is Ballard suggesting the key to using violence and allowing it? There is a brief interview with Ballard at the back of my edition of Kingdom Come that does nothing to clear up these questions, and that's a good thing.

That said, the story is interesting and thrilling and suites the treaty quite well, and for a book so sure that human beings all suck, it's not too terribly bleak.

I took this book with me, so I found myself sitting in a mall, reading a high moral tale about the insanity and inanity of the group mind that develops among those who pledge allegiance to a shopping center. The main gist of the story is this: an advertising man's father is shot and killed in Metro Center. Along with attacking consumerism, Ballard also hunts down racism with a vengeance, pursuing the dire situation in which the Pakistani community finds itself when confronted by roving gangs of football supporters who would have been right at home in Hitler's eisenstadt gruppen.

In that way it reminds me of "Supper Cannes", anyway if you've put it off like I did, don't.

This book was supposed to be a dystopian novel about sports hooliganism turning into the militant branch of "soft fascism" through the subtle prodding of an ad agency and a charismatic closed-circuit shopping channel spokesman; I think we can drop the "dystopian" label (it smacks of fantasy; the tarnished raygun shooting a warning shot into the toxifying atmosphere) - Ballard has extrapolated so keenly, that the whole text seems to be an eventuality, not the see-saw "soft maybe" of prophecy. Though, Tom Cruise would be an excellent choice to play washed-up actor turned transgressive media icon David Cruise. This book has the same title as one of those "Christian fiction" Left Behind books. Right in The Revelation. In The Revelation 22:18: For I testify unto every man that heareth the words of the prophecy of this book, If any man shall add unto these things, God shall add unto him the plagues that are written in this book.

In the late 1960s and early 1970s Ballard focused on an eclectic variety of short stories (or "condensed novels") such as The Atrocity Exhibition (1970), which drew closer comparison with the work of postmodernist writers such as William S. Described as "The best British novel about the Second World War" by The Guardian, the story was adapted into a 1987 film by Steven Spielberg.