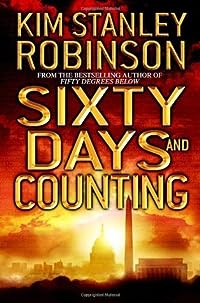 By the time Phil Chase is elected president, the worlds climate is far on its way to irreversible change.

A maverick in every sense of the word, Chase starts organizing the most ambitious plan to save the world from disaster since FDRand assembling a team of top scientists and advisers to implement it.For Charlie Quibler, this means reentering the political fray full-time and giving up full-time care of his young son, Joe. For Frank Vanderwal, hampered by a brain injury, it means trying to protect the woman he loves from a vengeful ex and a rogue black ops agency not even the president can controla task for which neither Franks work at the National Science Foundation nor his study of Tibetan Buddhism can prepare him.

In a world where time is running out as quickly as its natural resources, where surveillance is almost total and freedom nearly nonexistent, the forecast for the Chase administration looks darker each passing day.

CUT TO THE CHASE Posted 11:53 PM: We Americans dont want to be in a state of denial about our relationship to the world and its problems. If were five percent of the worlds population and were burning one quarter of the carbon being burned every year, we need to know that, and we need to think about why its happening and what it means. There are different kinds of denial. and one of the big ones pulls his head out and says Dont worry, just stick your head in like this, and the little ones look at each other and figure that if thats what their parents are doing it must be okay, so they stick their heads in the sand tooand in the last frame you see that all the holes in the sand are windows made of little TVs and computer screens. This is the Götterdämmerung, in which the doomed gods decide to tear down the world as they lose the big battle. When you take a look at our own Rapture culture, these people pretending to expect the end of the world anytime now, you see that we have our own Götterdämmerung advocates, all very holy of course, as the world destroyers always are. And its an ugly thing. We dont want the United States of America to be hauled before the World Court on a charge of attempted Götterdämmerung. We cant let that happen, because THIS IS AMERICA, land of the free and home of the bravethe country made of people from all the other countriesthe grand experiment that all world history has so far been conducting! So if we blow it, if America blows it, then all world history might be judged a failure so far. We dont want to go from being the hope of the world to convicted in the World Court of attempted Götterdämmerung. It has a lot of references specific to American history, details which I am not aware, one of them being, for example, the friendship between Thoreau and Ralph Waldo Emerson. I will leave here few more fragments; love them too much and I think they are worthy to be read: There are good anchors to reality and bad anchors to reality. Look, he even calls them the Four Bad Ds. Its like the Chinese, they are always Four Thises and Six Thats. Those are four bad Ds, all right.

A friend of Frank's, who is on the staff of the new president, believes that these same Buddhists took the soul of his two-year old child. She is scared, so she pretends to go along with it and surprise!, even fakes an attack by a bunch of secret agents, which Frank swallows.

Main characters are based around the NSF (the US research body responsible for evaluating funding proposals) mainly Anna Quibler (whose husband Charlie stays at home with their hyper-active younger son Joe while working as an advisor, particularly on environmental matters to a famous Democrat "world" senator - Phil Chase) and Frank Vanderwal (initially on a one year secondment from which he resigns to the NSF leader Diana Chang, he then retracts his resignation when she permits him to lead a redirection of the NSF into an aggressive programme to investigate ways to mitigate climate change both medium and short term. In both books the earth's climate is changing drastically due to: a hyper El Nino in "Forty Signs of Rain" which leads to Washington being flooded and the shutting down of the Gulf Stream in "Fifty Degrees Below" with Europe and US hit by a severe winter, followed by the collapse of large parts of the Antarctic ice sheet.

I'm rating this book well for global climate change awareness and ideas, but I never really got on with any characters and some of their strands just padded out the book. With 60 Days I had no idea who most of the characters were; why or how they were in Washington politics (oddly, no lobbyists were present) when the world was about to end from climate change. Other people around the world were working on climate change issues, so every now and then we'd get a report in by phone, but we saw lichen on Russian trees and a dyke being built. Some Tibetan ancestry people are present and they seem to be the token ethnic diversity characters, because they don't do anything either. I may get the earlier books and love them, but I read another cli-fi book Carbon Run by Joe Follansbee while in the middle of this one (which I don't recommend as you can get confused) and that was a lot more dramatic and clear-visioned about what will happen as the world warms. KSR's book is optimistic for a clear-sighted liberal leader to make science at the forefront and cut through politicking. We could have done with that kind of advice in the book, instead of our characters driving and globetrotting.

This book is somewhat weaker in the science of global climate change than the first two, and primarily focuses its time on politics. Well now, we have had the unexpectedly progressive President Obama for about two years, with rhetoric as inspirational as Phil Chase, but he has lost support in a big way during the recent midterm elections. first read - 24 March 2007 - This is the conclusion of KSR's new near-future environmental-disaster trilogy, which began with Forty Signs of Rain, and Fifty Degrees Below. Of all the characters, Caroline is probably the least developed, playing more of symbolic role in Frank's mind than a real one, until the end of the book.

Robinson follows up with the characters of the first two "Science in the Capitol" books as they put plans into motion to save the world.

In the final installment, the weather recedes a bit, and we can zoom in on the humans here, who weve gotten to know quite well by now. This is somewhat of a surprise complementing a Kim Stanley Robinson book because of character development? The deadly weather in the first two books has wrought changes in the U.S. political landscape, which unfortunately allow Robinson a bit too much leeway in indulging his Northern California liberal inclinations. Theres a bit of a miscalculation here: he describes how the horrible weather has hit Washington hard, and the eastern seaboard to a lesser extent, but doesnt go into much detail about whether blue states in the America heartland have suffered as well. In Robinsons world (and, perhaps, in ours) the impending devastation is so stupendous that no one who hasnt already bought in to these projects is paying attention, meaning delay serves no constructive purpose.

Despite my annoyance with the way the American political system believing the universe revolves around them (really, in that respect they can teach Wall Street a lesson) you get the sense that the characters in this novel will not let the world cook itself. I'd much prefer it if people read these books, thought about it, and not let it come to that.

this is the third book in KSR's environmental trilogy. If you like KSR the trilogy is probably worth reading but I have read better books by him.