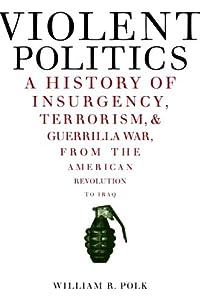 Violent Politics: A History of Insurgency, Terrorism, and Guerrilla War, from the American Revolution to Iraq

Its roots stretch back to our very own revolution.In Violent Politics, William Polk takes us on a concise, brilliant tour of insurgencies throughout history, starting with the American struggle for independence, when fighters had to battle against both the British and the loyalists, those colonists who sided with the monarchy.

Instinctively, in a way they probably wouldn't have described as a coherent strategy, the rebel groups employed the tactics of insurgency.From there, Polk explores the role of insurgency in several other notable conflicts, including the Spanish guerrilla war against Napoleon, the Irish struggle for independence, the Algerian War of National Independence, and Vietnam.

Read the Book "Violent Politics: A History of Insurgency, Terrorism, and Guerrilla War, from the American Revolution to Iraq" Online

Throughout the book, he explores his thesis by examination of a number of case studies--some well know and some less so. One interesting tidbit in this book focuses on current American counterinsurgency theory. Many people assess the current counterinsurgency doctrine as sound (and, indeed, if you read Petraeus' manual, you will find it pretty convincing), but Polk demurs. Polk remains deeply skeptical of any occupying power being able to determine beforehand if the occupation will be successful or if insurgency will develop and, in the end, triumph over the occupier.

This desire, without the involvement of the French, would have meant the downfall of the Revolution.

Somewhat ironically, the most telling part of the book was the very end, where the author, a former State Department official of the Kennedy administration, quoted a speech made by President Eisenhower in 1953: "Every gun that is made, every warship launched, every rocket fired signifies, in the final sense, a theft from those who hunger and are not fed, those who are cold and are not clothed.

Polk does this through showing, pretty convincingly, that local/native insurgencies will always win, and foreign occupying forces will always lose. The case studies include the American revolution (probably the least convincing, but rhetorically a smart inclusion for an audience of patriotic Americans), the Spanish fight against Napoleon's occupation, basically the whole modern history of the Philippines, Ireland's independence "Troubles", Yugoslav Partisans in WWII, Greek resistance in WWII, the Mau Mau in Kenya, the Algerian anticolonial fight, Vietnam in two parts--French and American, and finally Russia's war in Afghanistan. Interestingly, Polk frequently quotes Mao and invokes Mao's theory of guerrilla war, but doesn't include China as a case study.

Violent Politics by William Polk, former professor of history at the University of Chicago (and holder of many other posts as well), is a concise summary of the history and mishaps associated with insurgencies and counterinsurgencies running from the American Revolution through Algeria, Afghanistan, Somalia, the Balkans, Greece, Afghanistan, and of course, Vietnam. Polks well-document contention is that insurgencies (internal attempts to overthrow repressive regimes) center on three elements: the political, the administrative, and the military. Here Polk observes--remember, hes an historian, and a good one--the successful insurgent should hit and run, not confront a sitting regime or puppet regime or invading foreign force for as long as it takes to demoralize it politically. The United States, Great Britain, France, and Russia, all great powers, have failed many times in trying to put down foreign insurgencies either directly or through puppet governments. Ive spent a lot of time working on the insurgency/counterinsurgency issue--once in a way that was very up close and personal (see my book Nights in the Pink Motel about Iraq)--and have nothing but admiration for Polks swift survey of how the world really works.

However, I found this review over the internet that was exactly what I wanted to say: "Based on extraordinary research and more than thirty years of professional experience as Professor of History and Founding Director of the Center for Middle Eastern Studies at the University of Chicago, Dr. Polk has definitely produced an excellent read to educate us the intrinsic nuances of insurgency and the cost of occupancy through brilliant comparative analysis.